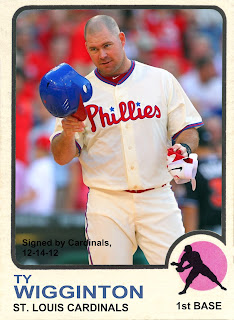 Things didn't go quite according to plan for Ty Wigginton during his short time in Philadelphia.  Brought in to be a back-up first baseman, third baseman and right-handed bat off the bench, Wigginton was forced into starting duty as a result of Ryan Howard's lingering achilles' tendon injury and Placido Polanco's bad back.  In 125 games, he hit .235 with 11 home runs and 43 RBIs.  The Phillies non-tendered him in October rather than bring him back for a second year, and the Cardinals signed him to a two-year contract on Friday.

He wasn't signed by Philly, he was given to Philly for nothing and (mostly) paid for by the Rockies. Surprisingly, this still isn't one of the worst trades for our front office.

So according to Baseball Reference, he was traded by the Rockies (with cash) for a PTBNL (or cash). The PTBNL was never actually named, and only cash changed hands. I wonder how much the Rockies ended up making in the deal?