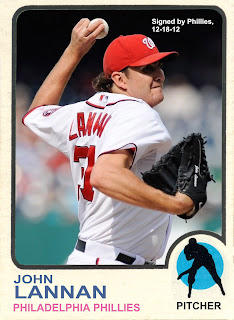 I can easily rattle off the names of certain Phillies pitchers from the recent past that seem to attract home team boos much more frequently than other pitchers.  Adam Eaton.  Kyle Kendrick.  Joe Blanton.  Chad Qualls.  In some cases, the boos were justified.  In others, the booing was a symptom of that pitcher being the decent, but not great fifth guy in an otherwise stellar starting rotation.

I've been a Phillies partial season ticket holder since 1992 and even with the All Star caliber starting pitchers on the roster over the past half dozen seasons, it definitely seems as if more often than not our tickets fall on the day the fifth guy is pitching.  I know I've seen Kendrick and Blanton pitch much more often than Roy Halladay, Cole Hamels or Cliff Lee.  And I just know that our 2013 season tickets will feature many more John Lannan games than games featuring the Three Aces.

Furthermore, and I hope I'm wrong here, Lannan is going to get booed.  And if he struggles, he will be booed with Eatonian vigor.  He will inevitably have rough outings.  But the primal source of the boos will be more basic than a poor outing from the newly acquired fifth starter.  In short, Phillies fans already don't like him.

During his Major League debut on July 26, 2007, Lannan was getting knocked around by the Phillies in a game I attended.  In the fifth inning that day, he hit Ryan Howard and Chase Utley on consecutive at bats, with Utley leaving the game with a broken hand.  Utley missed a month of the season, and the Phillies picked up Tadahito Iguchi to help fill the void.  The Phils inexplicably won their division in 2007, but our dislike for Lannan didn't wane.

Earlier this year, Phillies Nation awarded him the tenth spot on their list of "Guys We Despise," right ahead of Rod Barajas.  And now he's a Phillie.  It might be a little premature, but I feel safe in calling Lannan the guy "Most Likely to be Booed in 2013."  Again, I hope I'm wrong.
Posted by Jim at 8:00 AM