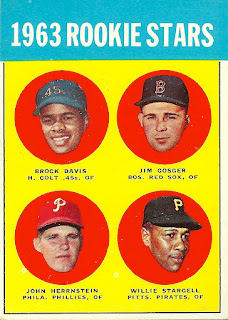 When I was putting together my want list of Phillies cards from the 1960s, the one card that I thought would be on my want list the longest was the 1963 Topps Rookie Stars card featuring outfielder John Herrnstein.  I also mentioned how tough it would be to track down this card in my 1963 Topps Phillies post.  There were a few reasons for this:

1.  Herrnstein's card falls within the last series of the set, making it automatically scarcer than the rest of the cards in the set.  There are 576 cards in the 1963 Topps set, with cards 447 through 576 making up the elusive high series.
2.  There's the little matter of the card also being the rookie card of future Hall of Famer Willie Stargell.  Because of this, it's not as pricey as the Pete Rose rookie card from the same set, but it's pricey enough.

This card had been #2 on my Ten Most Wanted listed (see sidebar for the updated list), until my Mom added the card to my collection via the annual "Santa Brings Way Too Many Awesome Baseball Cards to Jim" extravaganza.  Amazing.

The card is in fantastic condition, and it now has a happy home amongst my other 1963 Topps Phillies cards.

Herrnstein played in parts of five seasons with the Phillies, appearing in 213 games and hitting .222 with 8 home runs.  Along with sharing his 1963 card with Stargell, he also shared a 1964 card with that year's Rookie of Year - Richie Allen.  He'd get his own solo cards in the 1965 and 1966 Topps sets.  In April 1966, he was part of the deal that sent Future Hall of Famer Fergie Jenkins to the Cubs.  (Which reminds me - I still need Jenkins' rookie card from the 1966 Topps set.  Perhaps that card would be a good addition to the Most Wanted list.)

For the record, this is the third Stargell card in my Phillies collection.  He's featured with Rose on a Super Star Special card from the 1983 Fleer set and with Pat Burrell and Mark McGwire on a 2000 Topps Stars insert card.
Posted by Jim at 8:00 AM

Let me introduce you to my Ken McMullen rookie card acquiring difficulty ...

Night Owl - Best of luck with the McMullen rookie card. What a tough white whale to track down!

S36 - When I first noticed there was a Red Sox on the card, I immediately thought of you!

Late to the game here, but ... nice addition. That was one of the last 25 or so 1960s Phillies Topps cards I needed. I got it for a decent price after missing out a bunch on eBay; I tend to get the best prices on items that end inexplicably between about 2 am and 6 am. I'm not sure why someone would list an auction to end in the middle of the night!

Two others that were among my white whales, also pricey because of being high numbers, were the 1967 Bunning and 1966 Grant Jackson rookie--especially the latter. Check out the prices on eBay (it's card #591); there are a few that recently went for $50--mostly in rough shape--but most are in the $75 and up (way up in some cases) range. And he shares a card with the immortal Bart Shirley. So it must be a real short print. Anyway, I was lucky enough to get the two of them at the Philly Show in December for a combined $85, with Bunning in Ex-Mt and Jackson in Ex condition. (It took me awhile to spring for the Bunning because I had a real nice Topps Fan Favorites holding its place in the binder.)

Steve - I'll keep searching for those two cards. The pursuit is half the fun!

I had to also acquire this card for my Red Sox set.