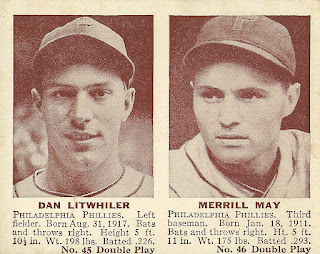 Last year, I chronicled my Mom's quest to continue the annual "Santa Brings Way Too Many Awesome Baseball Cards to Jim" tradition.  (See the posts linked below.)  This year, the tradition continued and I added several amazing vintage Phillies cards to my collection.  Similar to last year, I'm going to take my time in featuring the cards I received and spread them out over several posts.  As a teaser of what's to come, I can reveal that my Mom took care of two of the cards previously listed on my "Ten Most Wanted" list on the sidebar.  The list has since been updated to the "Eight Most Wanted," and I'll need to figure out two more cards to eventually add to the list.

The card featured at the top of this post is the first Phillies card in my collection from the 1941 Double Play (R330) set.  According to my new copy of the Standard Catalog of Vintage Baseball Cards, which my Mom also gave me for Christmas, the 75-card Double Play set was issued by Gum Products, Inc., based out of Cambridge, Massachusetts.  I found it amusing that the Catalog mentions, "Cards which have been cut in half to form single cards have little collector value."  This is something I definitely would have done had I been a kid in 1941.

This is the first card of Danny Litwhiler in my collection.  Litwhiler spent only parts of four seasons with the Phillies, from 1940 to 1943, enjoying his best season with the Phils in 1941.  That season, he hit .305 with 18 home runs and 66 RBIs.  More impressively, in 1942 he played 151 games in left field for the Phils and did not committ a single error, becoming the first player in history to play 150 or more games in the outifield in a season without an error.

Litwhiler went on to find great coaching success with the Florida State and Michigan State baseball programs and he was elected into six different baseball or athletic hall of fames.  He's also credited with developing the Jugs Speed Gun and as a member of the U.S. Olympics Baseball Committee from 1969 to 1983, he was instrumental in bringing baseball to the Olympic Games.  He passed away in Clearwater last year at the age of 95.

I featured a brief write-up on Merrill "Pinky" May a few years ago when I obtained his 1939 Play Ball card.

As confirmed with the 14,000 Phillies Database Project, there are two more Phillies cards in the 1941 Double Play set.

Email ThisBlogThis!Share to TwitterShare to FacebookShare to Pinterest
Labels: 1941, Litwhiler, May

Great card, and a great mom!

I've been looking at those Double Play cards as some of the Red Sox versions pop up in my searches of vintage. Haven't jumped in yet.