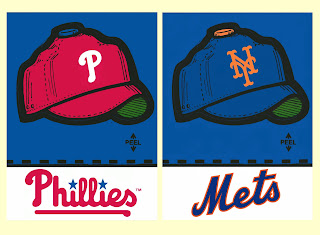 At the Ballpark:  The first 25,000 fans today will receive a Mets Fathead.  The Mets website has little detail on this giveaway other than a picture showing what appears to be six different Fathead wall hangings.

1979 Topps Flashback:  In March 1978, the Phillies acquired Bud Harrelson from the Mets for Fred Andrews and cash.  Harrelson had spent the first 13 years of his career with the Mets and reunited with his former teammate and friend Tug McGraw, he hit .214 in 71 games with the '78 Phils.

Harrelson retired following the season, but an injury to Larry Bowa, early in the 1979 season, convinced Harrelson to un-retire and come back to the Phillies.  (He became a teammate of former brawl-mate Pete Rose on the 1979 Phillies - see here and here.)  He hit .282 in 53 games, but he was released at the end of spring training in 1980.  He played in 87 games for the 1980 Texas Rangers before calling it a career.

Willie Montanez spent the 1978 and 1979 seasons with the Mets, having playing with the Giants and the Braves following six seasons with the Phillies.  Dick Allen Hall of Fame recently ran a great post on the man I heard my Pop-Pop once refer to as a hot dog.