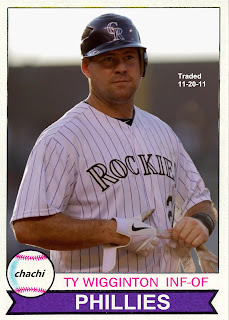 On Sunday night, the Phillies acquired infielder/outfielder/right-handed-bat-off-the-bench-guy Ty Wigginton from the Colorado Rockies for a player to be named later or cash.  The move puts the Phillies roster at a full forty men and perhaps ends the team's pursuit of free agent Michael Cuddyer.  It seems as if the Phils have coveted Wigginton for a while now, as his name always comes up at trade deadline time as a potential right-handed bat for the team.  Wigginton will see time at both first and third, spelling Ryan Howard and Placido Polanco who could both start the season on the disabled list.

With a new closer on board and a new and improved bench in place, the Phillies will now begin the task of figuring out who their shortstop is going to be in 2012.