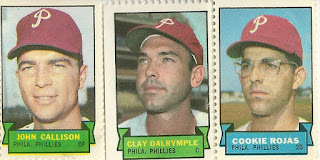 Whenever I receive baseball cards in a trade, the stuff that truly wows me are the oddball cards included within the package.  The old Topps cards are great, and I'll definitely spend plenty of time studying and appreciating them, but it's cool to receive something that you've never really seen before.  I already featured the three Exhibits cards received in my trade with John, but I also received several much smaller oddball items in the magic box as well.

John sent three stamps from the 1969 Topps Stamps set along with a unused Phillies Stamp Album.  I sure do wish Topps would issue more items like this today.  I have two boys under the age of five, and both of them love anything to do with stickers.  I'd gladly plunk down a few dollars for a pack of 2012 Topps Stamps if it meant I could help my boys with "their" collections.  Topps took a step in the right direction with their sticker set in 2011, but I'd like to see them bring back stamp sets too.  But I digress.

There are ten Phillies stamps included within the 1969 set, and the first page of the stamp album offers a helpful Table of Contents for those young collectors who couldn't be bothered to just flip through the seven pages of the booklet to find a certain player.  I'll be leaving my three new stamps loose and I'll be on the look-out for the seven remaining Phillies stamps in the set. 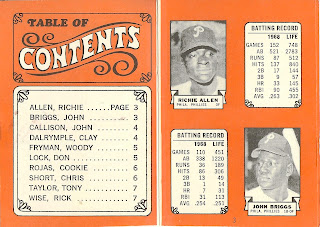 I'm starting to pursue the "oddball" issues for the Giants. Often they are harder to find, but fun to track down.

Hmm... my Clay Dalrymple stamp has a straight top edge, while yours is perforated. So he appeared in more than 1 location on the sheet of stamps.