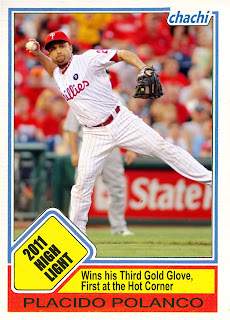 Placido Polanco won his third career Gold Glove a few weeks ago - his first as a third baseman after winning two with the Tigers as a second baseman.  He made only eight errors all year at third.  Polanco became the first Phillies third baseman to win the award since Scott Rolen won in 1998, 2000 and 2001.  Of course, Polanco has a few more to go before he'll match the ten Gold Gloves won by Hall of Famer Mike Schmidt.

Shane Victorino's streak of Gold Gloves was stopped at three as the Dodgers' Matt Kemp won the award as the best fielding center fielder this year.
Posted by Jim at 10:00 AM