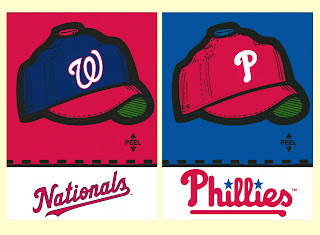 So Far in 2011:  The Phillies are 6-3 against the Nationals having most recently lost two out of three when they visited D.C. in late May.

At the Ballpark:  It's Alumni Weekend at the ballpark.  John Kruk will be inducted into the Phillies Wall of Fame tonight and dozens of Phillies alumni including Hall of Famers Mike Schmidt and Steve Carlton will be in attendance for the ceremony.

Saturday Night is Alumni Night with nearly 50 former Phillies scheduled to be introduced in a pre-game ceremony.  Phillies lifer and current Lakewood BlueClaws coach Greg Legg will receive the John Vukovich Award.  Sunday afternoon will feature the unveiling of a Harry Kalas statue outside the ballpark.