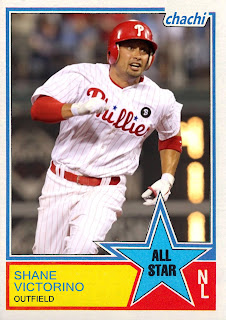 One Sentence Summary:  The Phillies pounded the Giants, 9-2, in a game that featured a bench-clearing brawl and a very angry Shane Victorino.

What It Means:  The Phils improved to 73-39 while winning their eighth in a row.

What Went Right:  Victorino, John Mayberry, Jr. and Hunter Pence all homered and Jimmy Rollins added a two-run single as the Phils easily defeated the Giants.

Tempers flared in the sixth when Giants reliever Ramon Ramirez drilled Victorino in the back with a fastball mainly as a result of the pitcher's own frustration at his inability to get anyone out.  Victorino took a few steps towards Ramirez, Giants catcher Eli Whiteside started hopping around in front of the plate and it was all downhill from there.  Whiteside tackled Placido Polanco as Polanco ran in from first to protect Victorino.  Victorino had to be forcibly restrained a few times to keep him from going back into the scrum.  Once everyone had been separated, Victorino, Whiteside and Ramirez were ejected and the game continued.

Featured Card:  Victorino won the Final Man vote to earn a spot on the N.L. All-Star roster, but he landed on the disabled list just prior to the All-Star break.  Nevertheless, he's earned a 2011 Chachi All-Star card.
Posted by Jim at 10:52 PM