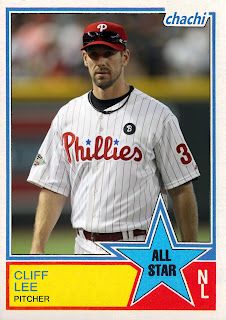 One Sentence Summary:  Cliff Lee pitched his fifth shutout of the season and Hunter Pence drove in two runs as the Phils shut down the Giants, 3-0.

What It Means:  The Phillies won their seventh straight game and improved their record to 72-39.  They now have an 8 1/2 game lead over the Braves in the East.  I'm on vacation, so it also means I got to stay up late on a school night and watch the entire game.

What Went Right:  Lee (11-7) needed 106 pitches to shut out the Giants.  He allowed just seven hits while striking out eight and walking none.  He struck out last year's postseason hero, Cody Ross, four times.

Pence and John Mayberry, Jr. hit back-to-back home runs off Madison Bumgarner in the second inning.  It was Pence's first home run as a Phillie.  He added an RBI-single in the ninth to pad the lead a little.  Since joining the team from the Astros, he's hitting .360 with five RBIs in six games.  Placido Polanco also contributed with some fine glove work in the field

Featured Card:  Pence came close last night to getting one of his baseball cards included in the game summary post, but it's hard to overlook Lee's dominating performance on the mound.  This is his All-Star card from this year's Chachi set.

I need to go back through Night Owl's archives to confirm this, but I think he ran a post a few years ago about the color selection used by Topps for its 1983 All-Star cards.  Clearly, the color behind the star should be blue.  Everyone knows the National League is represented by blue and the American League is represented by red.  (Right?)  I toyed with the idea of righting this wrong, but in the end I left the color as is.
Posted by Jim at 3:00 PM

I was at the game last night. The Giants' fans went crazy when Rollins was called out stealing third. They were then quiet until they got their only runner on 2nd in the 8th (that I remember). Lee was a machine. I got a hot chocolate from the vendors roaming through my section, I looked up and missed two batters...

By the way, freezing night at AT&T park.

It looked like it was cold. It was fun to watch Lee work last night. After the two home runs, I knew that was all he was going to need.