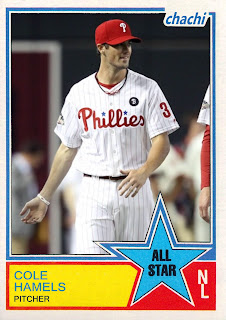 One Sentence Summary:  Cole Hamels mastered the Giants in a 2-1, complete game victory.

What It Means:  My vacation is over and it's back to the grind.  And the game . . . a pleasure to watch.  The Phils improved to 74-39 and they'll go for the four-game sweep tomorrow afternoon behind Roy Oswalt.  So far in the series, the Phillies have out-scored the Giants, 14-3.

What Went Right:  Hamels (13-6) came within one pitch of throwing a shutout, as he allowed a ninth inning home run to Pablo Sandoval.  On the next pitch, he retired Orlando Cabrera on a ground-out to end the ballgame.  The Giants threatened in the 4th and 8th innings, but Hamels was able to work out of both jams.

The Phillies made two first inning runs against Matt Cain stand up.  Jimmy Rollins doubled to lead off the game and came around to score on a Hunter Pence RBI-single.  Shortly after, Chase Utley scored the Phillies second and final run on a passed ball.

Featured Card:  Hamels received his second All-Star game nod this year, joining fellow pitchers Roy Halladay and Cliff Lee on the N.L. squad.  However, Hamels pitched the Sunday before the game, making him ineligible for the exhibition.

Transactions:  Oswalt was activated from the disabled list and Ryan Madson returned from the paternity leave list.  Scott Mathieson and Juan Perez were shipped out to make room on the roster.
Posted by Jim at 12:15 AM