One Sentence Summary:  The Phillies avoided a sweep in Phoenix behind three home runs, Placido Polanco's 4 for 5 at the plate and Cole Hamels' fine pitching performance.

What It Means:  Hopefully, the offense is returning.  With the win, the Phils returned to first place after a one day absence.

What Went Right:  The Phils hit three home runs in a game for the first time this season, courtesy of Shane Victorino, Jimmy Rollins (his first) and Ryan Howard.  Rollins started the scoring with an RBI-double in the first and had three RBIs on the day.

What Went Wrong:  The slumping Raul Ibanez wasn't in the starting line-up, but he struck out as a pinch hitter in the eighth, making him 0 for his last 26.  Carlos Ruiz, also mired in a slump, left after the first inning with lower back pain. 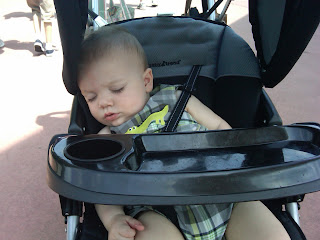 Featured Card:  This may be my favorite Phillies card in the 2011 Topps Heritage set.  I love that Rollins appears to actually enjoy the fact he's going to be on a baseball card in this photo, and the picture works well with the vintage design.

Disney Report:  After breakfast at the Crystal Palace with Winnie the Pooh and his friends, we spent the (very hot) day at Epcot.  Due to height restrictions, Ben decided to skip Test Track while Doug enjoyed the ride twice.
Posted by Jim at 5:00 PM

Email ThisBlogThis!Share to TwitterShare to FacebookShare to Pinterest
Labels: 1962, 2011, Rollins