One Sentence Summary:  The offense showed signs of life, but it couldn't overcome Roy Oswalt's rough outing as he lost for the first time this year.

What It Means:  The loss dashed any hopes of the team being in first place from wire to wire as they fell a half game behind the Marlins.

After the game, speculation with regards to Oswalt's back problems swirled as it was revealed he had left the team for personal reasons.  It turned out he had left to tend to his family and friends in his home town in Mississippi in the wake of the devastating tornadoes that had recently swept through the area. 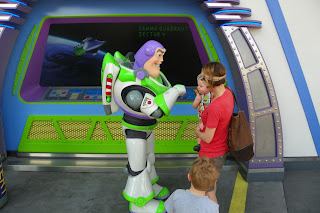 Featured Card:  The mood was gloomy in Phoenix, so let's head back to San Diego and relive the four-game sweep one last time!  The last time it happened, back on May 10, 1979, Ron Reed sealed the fourth win with a scoreless 1 2/3 innings.  He saved his second game of the season and lowered his ERA to 0.55.

Disney Report:  We spent Tuesday back at the Magic Kingdom where Doug took his first plunge down Splash Mountain and Ben met Buzz Lightyear for the first time.
Posted by Jim at 4:00 PM