One Sentence Summary:  Ryan Howard's two home runs, including a grand slam, led the Phillies over the hapless Mets, 10-3.

What It Means:  The Phils improved their record to 17-8 with the win, but the Marlins also won, staying a half game behind the division leaders.

Howard's big night tied him with Del Ennis for second on the Phillies all-time home run list with 259.  Mike Schmidt holds the top spot on the list with 548 career home runs.

What Went Wrong:  If not for David Herndon's ninth inning, the Mets would have been shut out.  Herndon allowed two homers in the ninth, surrendering all three Mets runs and bumping his ERA up to 9.28. 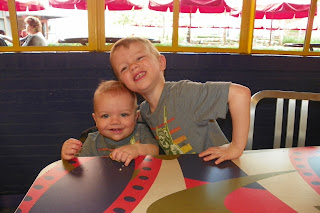 Featured Card:  I'm almost caught up with the posting of the final 2010 Chachi cards.  Howard's 27 RBIs in 2011 currently leads the National League.  In 2010, his RBI total was actually down as he only drove in 108.  Jayson Werth, now exiled in Washington, was second with 85.

Transactions:  On Thursday, the Phils placed Joe Blanton on the disabled list with elbow problems and recalled Worley from Lehigh Valley to take his place in the rotation.  Before the game on Friday, due to Carlos Ruiz' lingering back problems, Mike Zagurski was shipped back to Lehigh, and catcher Dane Sardinha was recalled.

Disney Report:  We returned to reality on Friday afternoon, exhausted, exhilarated and already ready for our next trip!
Posted by Jim at 6:00 PM