Phillies 9, Blue Jays 0
Game 71 - Friday Night, June 25th in Philadelphia
Wearing their road grays and serving as the "away" team, the Phillies and Roy Halladay easily handled the "home" Blue Jays, winning 9-0. Halladay, facing his former team for the first time, pitched 7 strong innings, allowing 6 hits while striking out 4. Getting the start at first while Ryan Howard DH'd, Ross Gload paced the offense with 3 hits and 4 RBIs, including a bases-clearing double in the 5th.
Chase Utley and Shane Victorino (Doug's favorite) each knocked in a pair of runs and Jimmy Rollins walked a career-high 4 times. Jayson Werth tripled and scored 3 runs.
I could have gone with a Halladay baseball card to represent this win, but how many chances will Ross Gload get this year to shine? I haven't seen the print edition of today's Philadelphia Daily News, but I'm hoping they used either "Fully Gloaded" or "Lock and Gload" to tout Gload's role in last night's victory. 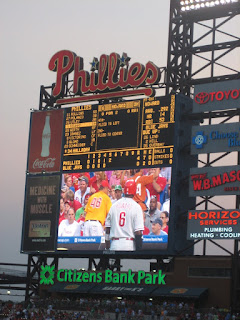 Away Game: We were there last night, taking in the game from the right field stands. Once we got over the initial weirdness of seeing the Phils in their road grays, and other than a few reminders, it seemed like any other home Phillies game. As the Blue Jays took the field in the top of the 1st, public address announcer Dan Baker half-heartedly declared, "Ladies and Gentleman, the 2010 Toronto Blue Jays!" There were a few boos, but for the most part the crowd didn't even really seem to take notice. Each Blue Jays player approached the plate to their home "walk-up" music, and a few Blue Jays' promo spots played on the big scoreboard between innings.

The Phils use giant 2009 Topps cards to represent that game's starting line-up on a wall inside the left-field entrance gate. As this was their first "home" regular season game to ever feature a DH, the 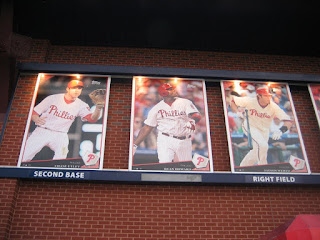 Phillies were not prepared with a "Designated Hitter" label for Howard's card. They opted to leave the space blank rather than do a quick mock-up of a DH label.
On the Menu: While Doug enjoyed a slice of pizza from Seasons Pizza, Jenna and I opted for Bull's BBQ. She went with the pulled pork sandwich platter while I went with the highly recommended sampler platter, consisting of a pulled pork slider, a grilled turkey slider and a mini Bull Dog. Chickie & Pete's crab fries were enjoyed by all (mostly me) and Jenna and Doug capped off the night by splitting a vanilla soft serve ice cream in a helmet with rainbow sprinkles. It was by far the best Blue Jays home game I've ever attended.
Posted by Jim at 3:55 PM

Email ThisBlogThis!Share to TwitterShare to FacebookShare to Pinterest
Labels: 2010, Gload

I love that they played the Blue Jays walk-up music. Was the ice cream in a blue jays helmet?

Hope you kept score...with the Phillies on the "wrong" side.

I haven't kept score since we started going to the games with Doug - it's just too hard to focus on each play of the game. Don't worry though, I'll teach him the fine art of scorekeeping once he's old enough.

Ice cream in a Blue Jays helmet would have been cool, but they were featuring the helmets of the visiting team.