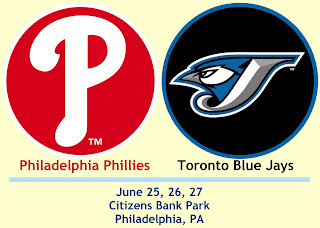 Records: Phillies 38-32, 3rd Place in NL East (2½ games behind the Braves); Blue Jays 38-34, 4th Place in AL East (6½ games behind the Yankees)
Former Blue Jays with the Phillies: Well the big one here is Roy Halladay, who pitched with the Jays from 1998 through last season. His 148 wins with the team is 2nd on their all-time list behind Dave Stieb with 175. He was a 6-time AL All-Star and won the AL Cy Young Award in 2003. Perhaps second in magnitude behind Halladay is current Senior Advisor Pat Gillick, who was with the Blue Jays from 1978 until 1994, putting together back-to-back World Series Champions in 1992 and 1993. Sarge Matthews was the team's hitting coach in 1998 and 1999. Finally, Jayson Werth made his Major League debut with the Blue Jays in 2002, appearing in 41 games with the team over 2 years, but hitting just .234 with 2 home runs.

2010 Topps #200 Roy Halladay
G-20 Summit: The G-20 Summit on Financial Markets and the World Economy is currently going on in Toronto. Fear of police activity due to demonstrators and unruly protesters caused the Blue Jays and Major League Baseball to decide to move the 3-game series to Philadelphia. The Phils will wear their road grays, bat first and use the DH. This should be interesting!
What is the G-20? From Wikipedia, so it must be right: The Group of Twenty Finance Ministers and Central Bank Governors (known as the G-20 and also the G20 or Group of Twenty) is a group of finance ministers and central bank governors from 20 economies: 19 countries plus the European Union. And now you know.
Phillies Probables: Roy Halladay, Cole Hamels, Jamie Moyer
Blue Jays Probables: Jesse Litsch, Shaun Marcum, Brett Cecil
Posted by Jim at 12:00 PM