Happy St. Patrick's Day!
I'm not sure when exactly it started, but at some point in the mid-80's, the Phillies started wearing all green uniforms for their St. Patrick's Day exhibition game. Don't quote me on this, but I think it was an idea originally pitched by the eccentric leprechaun himself, Tug McGraw. 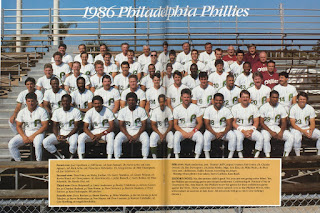 Through the years, the Phillies stopped going with the full green uniforms and instead cut back to just wearing green hats.
As a bonus, here's the Phillies team picture from their 1986 Yearbook. The team has continued the tradition of donating the green uniforms and hats worn each year to the Phillies Wives, who auction them off to benefit the ALS Association.
Posted by Jim at 7:15 AM

Email ThisBlogThis!Share to TwitterShare to FacebookShare to Pinterest
Labels: 1986, 1989, Schmidt