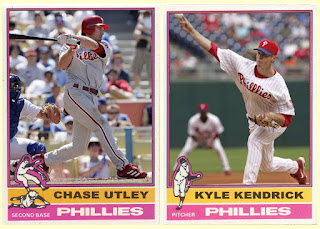 Spring Training notes from someone who spent a week in Cincinnati with little to no Phillies news . . .

The Phillies continue to whittle down their roster to the requisite 25-man opening day size. The recent significant moves include the optioning of pitchers Sergio Escalona and Drew Carpenter, along with infielder Brian Bocock. Both Escalona and Carpenter were mentioned early as having outside shots of breaking camp with the team. Escalona's 2 blown saves and his 11.25 ERA didn't help his case any. Meanwhile, it appears unlikely closer Brad Lidge (elbow and knee surgery) will be ready to start the season on time and J.C. Romero (elbow surgery) is also iffy, at best.
Earlier in the week, top outfield prospect Domonic Brown went 3-for-3 against the Tigers with 2 home runs and 4 RBIs. His first home run was all the more impressive in that it came after a 9-pitch at-bat against Tigers ace Justin Verlander. He was awarded for his efforts by being re-assigned to minor league camp. But he'll be back. (Expect to see a 2011 Chachi card for Brown.)
Third baseman Placido Polanco left Monday afternoon's game with a sprained right knee after tripping himself up on the pitcher's mound while trying to catch a pop-up. He was supposed to be in the line-up tonight against the Orioles, but Greg Dobbs is starting instead.
It's interesting to see who is leading the Phillies in a few offensive and pitching categories:
Home Runs - Cody Ransom, 5
RBI - Domonic Brown, 8
Hits - Ryan Howard, 11
Average, at least 15 at-bats - Chase Utley, .609!
Wins - Joe Blanton, 2
ERA, at least 10 innings pitched - Roy Halladay, 0.90, and Cole Hamels, 1.69
Raul Ibañez (.143) and Ben Francisco (.167) are struggling on the offensive side, while Jamie Moyer, who has yet to appear in an A game, has been hit around in a few B game appearances.
And finally, Kyle Kendrick, looking to bump Moyer from the 5th starter's job, has not allowed a run in 9 innings and he's put together a WHIP of 0.44 entering tonight's game. Looks as if those January work-outs with Roy Halladay may be paying off for Kendrick.
Posted by Jim at 9:39 PM

What do you think the Phillies will do with Moyer if Kendrick beats him out?

Until Romero or Lidge come back, there's room for Moyer in the bullpen. After that, the picture gets murkier.