1985 Cigna Phillies #9 Glenn Wilson
25 years ago, another season started full of hope and full of promise for the Phillies. John Felske was preparing to begin his tenure as Phillies manager after serving as Paul Owens' bench coach in 1984. The team was fielding a young nucleus of players such as Juan Samuel, Jeff Stone, Steve Jeltz and Von Hayes - a nucleus then president and general manager Bill Giles was sure would make the Phillies the "team of the '80s." And I had a brand new set of colorful magic markers, that I was determined to use as much as possible throughout my 1985 Phillies Scrapbook. 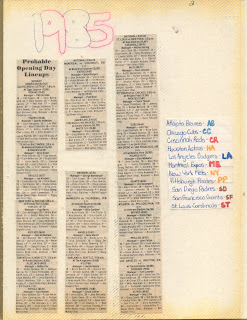 Everything worked out fine for me and my new magic markers, but the same can't be said for the 1985 Phillies. The "team of the '80s" started the season with a record of 1-8, and they never quite got going. In May, Gold Glove third baseman Mike Schmidt shifted over to first base to make room for rookie Rick Schu. Right fielder Glenn Wilson was the team's MVP, driving in 102 runs and starring in a series of "Glenn-bo" commercials for the team, dressed in full Rambo regalia but with baseballs criss-crossing his chest instead of grenades. Kevin Gross led the pitching staff with 15 wins and Kent Tekulve was the team's primary closer, saving 14 games.

The Phils finished the season with a record of 75-87, in 5th place, 26 games behind the first place Cardinals. John Felske would last until June 1987 when he was fired and replaced by Lee Elia. Glenn-bo's production fell off over the next two seasons and he was traded to the Seattle Mariners following the 1987 season with reliever Mike Jackson for outfielder Phil Bradley.
Posted by Jim at 12:00 PM