Along with several 1982 Topps Sticker books with which I was reunited, I recently had the pleasure of adding my original Phillies scrapbooks from the mid-'80s and early-'90s to the Phillies Room shelves. Beginning in 1984, I religiously kept a Phillies scrapbook, consisting of box scores, interesting newspaper articles, current rosters and pictures. I used photo albums to collate the season's events and I made sure my parents didn't throw out any Sports' sections until I had cut out what was needed for my scrapbooks. Scrapbooks followed in 1985 and 1986, and each year's content increased and improved over the last.


I must have gone through a "too cool for scrapbooks" phase between 1987 and 1989, as I stopped putting them together during those three years. I guess Junior High will do that to a guy.


The scrapbooks returned in 1990 and lasted until late July 1992 when I shipped out for college. These latter scrapbooks relied heavily on print-outs of rosters, box scores and statistics from my state of the art Commodore 128.


I view these scrapbooks as precursors to this blog, as I've always enjoyed chronicling the day to day happenings of the Phillies. Every Sunday throughout 2010, if I remember, I'll scan and 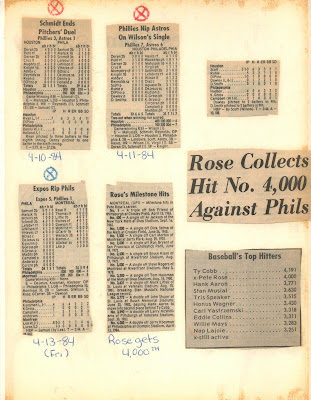 share a page from one of these scrapbooks, accompanied by a baseball card relevant to the page. In a true stroke of genius and with a keen sense of clever alliteration, I will call these posts Scrapbook Sundays. I've been reluctant to add a running feature to my blog, as I like the freedom of posting whatever and whenever I feel like on any given day. However, I'm thinking this will work as I'll keep the narrative to a minimum in my Scrapbook Sunday posts, and I'll let the pages speak for themselves. (Please click to enlarge.)


Here then, is the first of many (52?) Scrapbook Sunday posts.


April 13, 1984: Pete Rose doubled in the 4th inning off the Phillies Jerry Koosman for his 4,000th career base hit. The box scores are cut from the Atlantic City Press. According to the legend at the front of this scrapbook, red circles and red X's indicate home wins while the blue circle and the blue X represent a road loss.
Posted by Jim at 12:00 PM

You could always call the feature "Scrapbook Sometimes" then you wouldn't need to hold a firm schedule.

There are too many deadlines out there already without adding another one. The first time I miss a Sunday, I'm going with your suggested name.