World Series Game 3 - October 31, 2009
Yankees 8, Phillies 5
Had this been 2008, an early 3-run lead with Cole Hamels on the mound would be all the Phillies would need to practically guarantee a victory. Unfortunately, this is 2009 and the night quickly turned into Cole's Halloween Horrors.
The home crowd was electric as Cole finally took the mound an hour and twenty minutes after the scheduled start of the game, due to the obligatory World Series Game 3 rain delay. Jayson Werth put the Phillies on the board first with a solo home run to lead off the 2nd inning. Jimmy Rollins drew a bases loaded walk for the Phils' second run of the game and one batter later, Shane Victorino's sac fly to left scored the third run.
Cole's night started to unravel in the 4th inning after he had retired 10 of the first 11 Yankee batters. Following a walk to Mark Teixeira, Alex Rodriguez got the Yankees within a run with an instant-replay reviewed and approved 2-run home run. The Yanks plated three more in the 5th and Cole's night was over. The Phillies bullpen then allowed solo runs in the 6th, 7th and 8th innings.
Solo home runs from Jayson Werth (his second of the night) in the 6th and Carlos Ruiz in the 9th closed the gap a little, but it was not enough. With the 8-5 win, the Yankees took a 2-1 lead in the World Series.
He Said What?: Following Game 3, when asked to comment upon his disappointing 2009 season, Cole Hamels reportedly responded he "can't wait for it to end." This is not the type of quote that will endear you to Phillies fans, Cole. 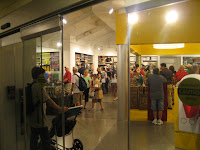 Downtown Disney on Halloween: If you're considering spending Halloween in Downtown Disney next year - don't. The place was a madhouse since there were various free candy pick-ups scattered throughout the marketplace. And the heat (88 degrees) precluded Doug from donning his Buzz Lightyear costume. All was not lost as we made a pitstop at the Lego store and added a Lego circus train to Doug's growing collection.
Posted by Jim at 8:00 PM

Downtown Disney IS the place to be on Christmas, though. While Magic Kingdom has to close at noon because it's packed to overflowing, Downtown isn't that crowded.

Good to know! I've heard about the Magic Kingdom not letting anyone else in when it's overflowing, but fortunately I've never witnessed it firsthand.