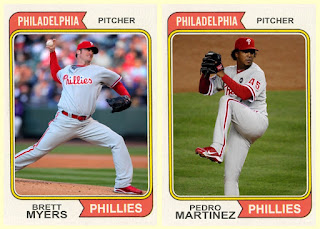 2010 Chachi Ex-Phillies #X1 Brett Myers
2010 Chachi Ex-Phillies #X2 Pedro Martinez
Twenty-eight people cast their votes in the poll to help decide which Topps set should be used as the basis for the 2010 Chachi set. Amazingly enough, the results fell in line with how I was hoping the poll would turn out (voters could vote more than once):
1974 Topps - 11 votes
1983 Topps - 10 votes
1971 Topps - 8 votes
1982 Topps - 2 votes
To commemorate the 1974 Topps set's victory, I'm featuring the first two ex-Phillies of the offseason. Brett Myers and Pedro Martinez filed for free agency on Friday, and they join Miguel Cairo and Pedro Feliz as members of the 2009 NL Champs who most likely won't return next year. I thought Brett Myers had pitched his final game as a Phillie back in May, but to his credit, he worked his way back from injury. It was a fun ride with Pedro, although I'm not convinced he was the right choice to start Game 6.

There's still some unfinished business with the 2009 Chachi set - I need to complete the World Series cards (unfortunately) and a checklist is needed. The 2010 Chachi set will debut on Opening Day, April 5, 2010.
Posted by Jim at 2:15 PM

I like your old-school Chachis! Do you also create the back of the cards?

I created backs for the 2005-2008 Chachi card sets, but I stopped in 2009. It was honestly just too time consuming, although I may go back to creating backs for a select few cards going forward.