World Series Game 4 - November 1, 2009
Yankees 7, Phillies 4
The Phillies lost their first ever game played in November in excruciating fashion, giving the Yankees a commanding 3-1 lead in the World Series. In terms of painful losses, this loss could be compared to the agonizing 1993 World Series Game 6 loss courtesy of Mitch Williams and Joe Carter. (I just used excruciating, painful and agonizing in the first paragraph - this should be a great post.)
The Yankees jumped on Phillies starter Joe Blanton early, scoring two in the 1st inning. The Phils quickly got one back in the bottom of the 1st on a Chase Utley RBI-double. After that, Blanton and Yankees starter CC Sabathia settled in for a few innings. In the 4th, after Ryan Howard singled and stole second to start the inning, Pedro Feliz singled him home to tie the game. The tie would be short-lived however when Blanton walked Nick Swisher to start the Yankees' 5th, and he'd ultimately come around to score. (Don't walk the lead-off guy after your team ties the game, Joe!) The Yankees would eventually score twice to regain the lead, 4-2.
CC's final pitch of the night resulted in a Chase Utley solo home run in the 7th, to make it 4-3 Yankees. With two outs and a full count in the bottom of the 8th, Pedro Feliz lined a solo home run to left off Joba Chamberlain, and I may have awakened a zebra. (More on that later.)
And then it all went horribly wrong. Brad Lidge retired the first two Yankees in the top of the 9th, and had two strikes against Johnny Damon. It all happened so fast: Damon bloops a single to left, Damon steals second, notices no one is covering third and steals third, Teixeira gets drilled, A-Rod doubles, Damon scores, Posada singles to left, scoring Teixeira and A-Rod, 7-4 Yankees, Mariano Rivera pitches 1-2-3 bottom of 9th, game over. Excruciating. 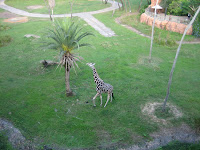 In the Jungle: We watched this game from our room at Disney's Animal Kingdom Lodge. Unbelievably, zebras, giraffes and gazelles were roaming the savanna during the game, viewable from our balcony. Earlier in the day, we grooved with Frozone and Mr. Incredible at the Move It, Shake It, Celebrate It Street Party at the Magic Kingdom. Jenna's highlight was watching Doug react to the 4-D Mickey's Philharmagic movie, especially during the "Be Our Guest" segment.
Posted by Jim at 10:16 PM

I need to stay in that room. It must have been incredible.

Absolutely amazing, and I hope we get to stay there again one day. Highly, highly recommended.