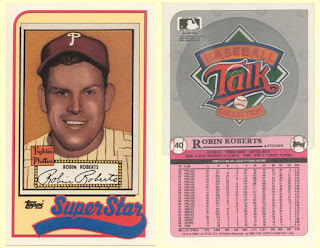 Thanks to the wonders of the internet and my ability to figure out how to download updated drivers for my scanner, scanning capabilities have returned to The Phillies Room. (I don't know what a driver is, what caused it to depart my computer, or how it affects my scanner, but it is now updated.)

A week prior to our Disney trip I completed a trade with David, aka Rhubarb_Runner. In exchange for a stack of Twins cards from his wantlists, David sent over a wonderful collection of Phillies cards from my wantlists, and included a few oddball cards I had never seen. Featured here is one of those cards. This "card" is from a 164-card set issued jointly by Topps and LJN Toy Co. in 1989. According the Standard Catalog of Baseball Cards, the plastic disc on the back featured a short biography that could be heard by inserting the card into a hand-held player. The biographies are narrated by either Don Drysdale, Joe Torre or Mel Allen. I totally missed these when they first came out, and this is the first time I've ever seen one of these "Baseball Talk" cards. Pretty cool.
Thanks to David's generosity, I've added several '63 Topps, a few '70 Topps and 20 or so '74 Topps cards that look as if they're straight from a vending box to my Phillies collection. Along with the Roberts oddball card, David also included several "repli-cards" masterfully cut from the inserts of a few early '90s Baseball Cards Magazines. I hope to feature a few of these cards in the coming weeks. Thanks again David!
Posted by Jim at 10:08 PM

Email ThisBlogThis!Share to TwitterShare to FacebookShare to Pinterest
Labels: 1952, 1989, Roberts

The pleasure was mine! Always happy to find a good home for the non-Twins cards I have lying around. Keep me in mind if you stumble across any other cool Twins cards in the future.