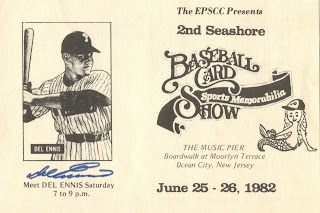 1982 Ocean City Baseball Card Show Postcard - Del Ennis
1983 Girard Great Phillies Moments #3 Art Mahaffey
The proprietors of Dinged Corners recently asked fellow baseball card bloggers to list their three favorite on-card autographs. These are cards on which the autograph landed by placing pen to cardboard, instead of the signor signing a sticker and someone from the card company affixing the sticker to cardboard. Autographed baseball cards the way autographed baseball cards are supposed to be.

My all-time favorite on-card autograph was recently featured following the Phillies World Series Game 5 victory. His Whiteness signed his '59 Topps card for me in person at a baseball card show we attended in Cherry Hill - I think. (Why do I think it was Cherry Hill?) 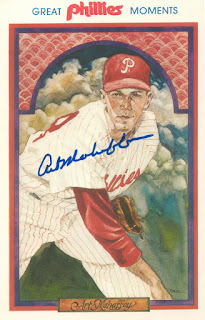 I've often waxed nostalgic for the long gone Ocean City baseball card shows. Both cards featured here were obtained in person, with my Dad, while attending past Ocean City shows. (I know the Del Ennis autograph isn't technically on a baseball card, but it's still one of my most prized possessions.) I clearly remember standing in line at those shows, waiting for Del Ennis' and Art Mahaffey's autographs. You could hear the waves crashing and gulls calling through the open windows on the Music Pier and I most likely took a break from flipping through Diamond Dust's '75 Topps binder to get these autographs. I didn't really know who these guys were at the time, but my Dad seemed to be in awe of them, so I knew they were special.
I've added dozens of on-card autographs to my Phillies collection since then, but they don't mean nearly as much as these three.
Posted by Jim at 12:00 PM

I miss the Ocean City baseball card shows. When I was younger, my family used to go there for our summer vacations & it usually worked out that I got to go to those card shows.

I got my first autograph ever at Ocean City - Jim Bunning.

Thanks for reminding me about them.

It was the Ocean City show...Mike Schmidt was Cherry Hill...there are certain memories that stand out for old guys...I loved the OC show and Mack and Mancos and meeting your Mom and sister... bring back Ocean City

One of the highlights of the year . . . I'd save all year for the show and come away with enough new cards to keep me busy for months.