This is not a game I particularly care to remember or to recap. Suffice it to say, it was not an enjoyable game. The Yankees soundly defeated the Phillies in Game 6, winning their 27th World Championship.

The Damn Yankees took a 2-0 lead in the 2nd when Hideki Matsui golfed a Pedro Martinez fastball into deep right. In total, the eventual World Series MVP would explode for 6 RBIs on three hits in the game. The Phils got a run back in the 3rd when Chooch tripled and Jimmy Rollins drove him in with a sac fly. But that was pretty much the extent of the Game 6 excitement for a Phillies' fan.

In the bottom of the 3rd, the Yankees started another rally when Shane Victorino misplayed a Derek Jeter fly ball, resulting in a single for the Yankees' captain. Matsui knocked in two more with the bases loaded in the inning, making in 4-1 Yankees. After the Yanks scored three more in the 5th, to give them a commanding 7-1 lead, it was all but over. Ryan Howard hit a 2-run homer in the 6th, but it wouldn't be enough.

Yankees closer Mariano Rivera recorded the last five outs of the game for the save. I watched the first two outs of the top of the 9th inning, but as of this writing I have yet to see the final out. I saw Shane Victorino send a weak grounder to second and I turned off the TV and went to bed.
Down and Out: This was also the day I started figuring out I was sick. What I thought was a simple cold turned out to be the flu, and our Disney trip took a significant detour. Doug caught it too and we spent the final days of our trip in various stages of grumpiness and/or slumber. I beat it first and then Doug beat it and thankfully Jenna never caught it.

Best Tweet: From beat writer Andy Martino at phillieszone - Robin Roberts in clubhouse. Would be fully rested for a potential Game 7. 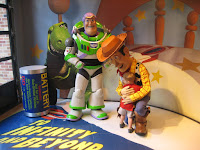 Mission Accomplished: The Phillies didn't accomplish their mission, but Doug certainly did. He informed us prior to leaving for "Mickey's House" that he wanted to say hello to Buzz and Woody during his visit. Not only did he get to tell them hello, he also gave them hugs and high fives and informed Woody, "There's a snake in my boots!" Woody seemed amused. And for the record, by my unofficial tally, there were many, many more Phillies fans in Disney than Yankees fans.
Posted by Jim at 10:33 PM

That was a fun day in Disney. Can't wait for Christmas so we can play Toy Story Mania on our Wii!

I didn't much like that day at all. I watched until the final out and then switched off the TV. I refused to watch the celebration, the MVP award announcement and any Sportscenter "lowlights."