One Sentence Summary:  Ranger Suarez pitched a gem, throwing his first career complete game shutout in this 3-0 win over the Pirates.

What It Means:  Suarez pitched a Maddux - a complete game shutout in less than 100 pitches - and became the first Phillies pitcher to do so since Kyle Kendrick in 2012.

What Happened:  Matt Vierling hit his first career home run in the third, followed by Bryce Harper hitting his 34th home run of the season a few batters later.  In the fifth, Brad Miller singled home Jean Segura to give the Phillies a 3-0 lead.  That was plenty of run support for Suarez.

Featured Card:  Suarez allowed four hits while striking out seven and walking none, throwing 97 pitches.  His baseball card appearances have been spotty over the past four years, and he should at least receive a Topps Now card today for his efforts.  I'd also hope to see him all over the 2022 Topps releases.
Field Report:  Doug and I made it two games in a row, watching Suarez's masterful performance from the Diamond Club.  With Doug's fall ball season in full swing, we arrived late to this game (in the second inning) and it seemed as if we spent more time waiting in line for crab fries and then trying to navigate our exit from the parking lot after the game, than we actually spent sitting in our seats watching Suarez deal.  This was the most crowded and most electric crowd I've seen at the ballpark in quite some time. 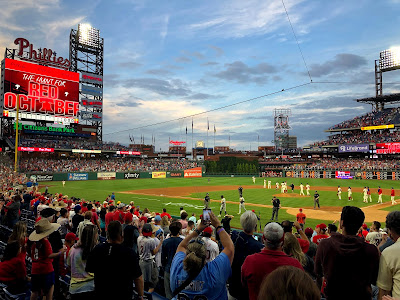 Transactions:  Kyle Dohy (lhp) had his contract purchased from Lehigh Valley and Archie Bradley (rhp) was placed on the 10-day injured list with a right oblique strain.  To make room for Dohy on the 40-man roster, Matt Moore (lhp) was moved to the 60-day IL.

Email ThisBlogThis!Share to TwitterShare to FacebookShare to Pinterest
Labels: 2018, Suarez