One Sentence Summary:  The Phillies once again battled back from a deficit to dramatically win another game while gaining a half game on the Braves.

What It Means:  The Phillies have won eight of their last 10 and the upcoming Braves series will actually mean something.

What Happened:  Phillies starter Kyle Gibson cruised through the first three innings, but faltered in the fourth, allowing four runs.  Ironically enough he had hit his first career home run in the bottom of the third, and I worried he'd be too amped up when he returned to the mound.  Trailing 4-1, the Phillies got within a run when Brad Miller hit a solo home run in the fourth and Bryce Harper delivered a RBI-double in the fifth.  They tied the game on a sixth inning wild pitch from Pirates reliever Nick Mears, and took the lead on another clutch pinch-hit from Ronald Torreyes.
Reliever Cam Bedrosian recorded the team's 34th blown save in the seventh, tying the major league record held by the 2004 Rockies.  Now down 6-5, with two runners on, two outs and no real options off the bench, the struggling Didi Gregorius stepped to the plate.

Featured Card:  Gregorius launched a three-run home run to right center field, giving the Phillies an 8-6 lead.  Hector Neris battled in the seventh and eighth to keep the Pirates off the board, and then Ian Kennedy locked down his ninth save.
Field Report:  Doug and I enjoyed the beginning of this game from our seats in Section 115.  We admittedly decided to leave early as Doug had an early morning baseball game on Saturday.  So we missed the late heroics, but we did get to see a marriage proposal a few rows in front of us in Section 116. 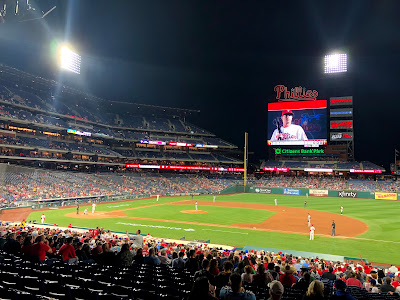