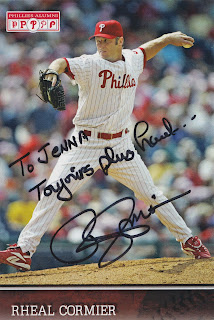 One Sentence Summary:  It was another quiet afternoon for the offense as the Blue Jays topped the Phillies, 4-1.

What It Means:  Since their 15-run outburst against the Yankees on Thursday, the Phillies have been held to five runs over their last four games.  With no radio or TV broadcast of this game, I watched a portion of this game via a wind blown camera stationed in center field and live-streamed on the Blue Jays' website.

What Happened:  Vince Velasquez threw 39 pitches in 1 2/3 innings, allowing an earned run on a hit and two walks.  Matt Moore continued his perfect spring with two more scoreless innings.  Connor Brogdon, Archie Bradley and Jose Alvarado also threw scoreless frames.  The Phillies' sole run came in the eighth when Nick Maton doubled home Mickey Moniak.  Moniak continues to swing a hot bat and with his triple in this game his average is up to .556.

Featured Card:  On Monday afternoon, we learned former Phillies reliever Rheal Cormier had passed away after a battle with cancer.  Cormier was 53 years old.  He was one of the original Phillies Room Favorites and also one of my wife Jenna's favorite players.  By all accounts he was a good guy, and Jim Salisbury wrote a nice tribute here to the former lefty reliever.
In six seasons with the Phillies between 2001 and 2006, Cormier appeared in 363 games, which is second on the all-time franchise list among lefty relievers behind Tug McGraw.  He went 8-0 with a 1.70 ERA in 2003, appearing in 65 games.  He was the winning pitcher in the final game the Phillies won at Veterans Stadium on September 27, 2003, and then was the winning pitcher in the first game the Phillies won at Citizens Bank Park on April 7, 2004.
My family and I met Cormier briefly on two occasions, both during the 2014 season.  He was signing autographs before the game on April 12, 2014, and he posed for a picture with our oldest son Doug before taking the field to throw out the ceremonial first pitch.  He was back signing autographs on August 9, 2014, joined by Ricky Jordan, as part of that season's Alumni Weekend/Wall of Fame celebration.  This time Jenna got to pose with one of her favorite players and he signed the photo card shown above for her.
At some point during his years with the club, we purchased one of his game-used hats at the annual offseason clubhouse sale.  The hat is sweat-stained with his number 37 written in permanent marker on the underside of the brim.  There's a small religious charm safety-pinned to the inside of the back of the hat.  On the off chance anyone from Cormier's family ever comes across this post I'd love to find a way to get this hat to you as it's something that rightfully belongs with his family.

Email ThisBlogThis!Share to TwitterShare to FacebookShare to Pinterest
Labels: 2014, Cormier