One Sentence Summary:  The Mets and Antonio Bastardo spoiled Charlie Manuel's night with an 11-inning, 2-1 win.

What It Means:  The Mets have taken the first two games of the series, and the Phils will try again this afternoon.  It also means the Phillies are 4-5 in games I've attended this season.

What Happened:  The offense just couldn't get anything going against Mets started Dillon Gee, and Cole Hamels was once again the victim of low run support.  Hamels pitcher seven solid innings, allowing a run on five hits.  Carlos Ruiz accounted for the lone Phillies run with a solo home run in the seventh.

Bastardo loaded the bases in the 11th and coughed up the eventual winning run when Lucas Duda singled to right. 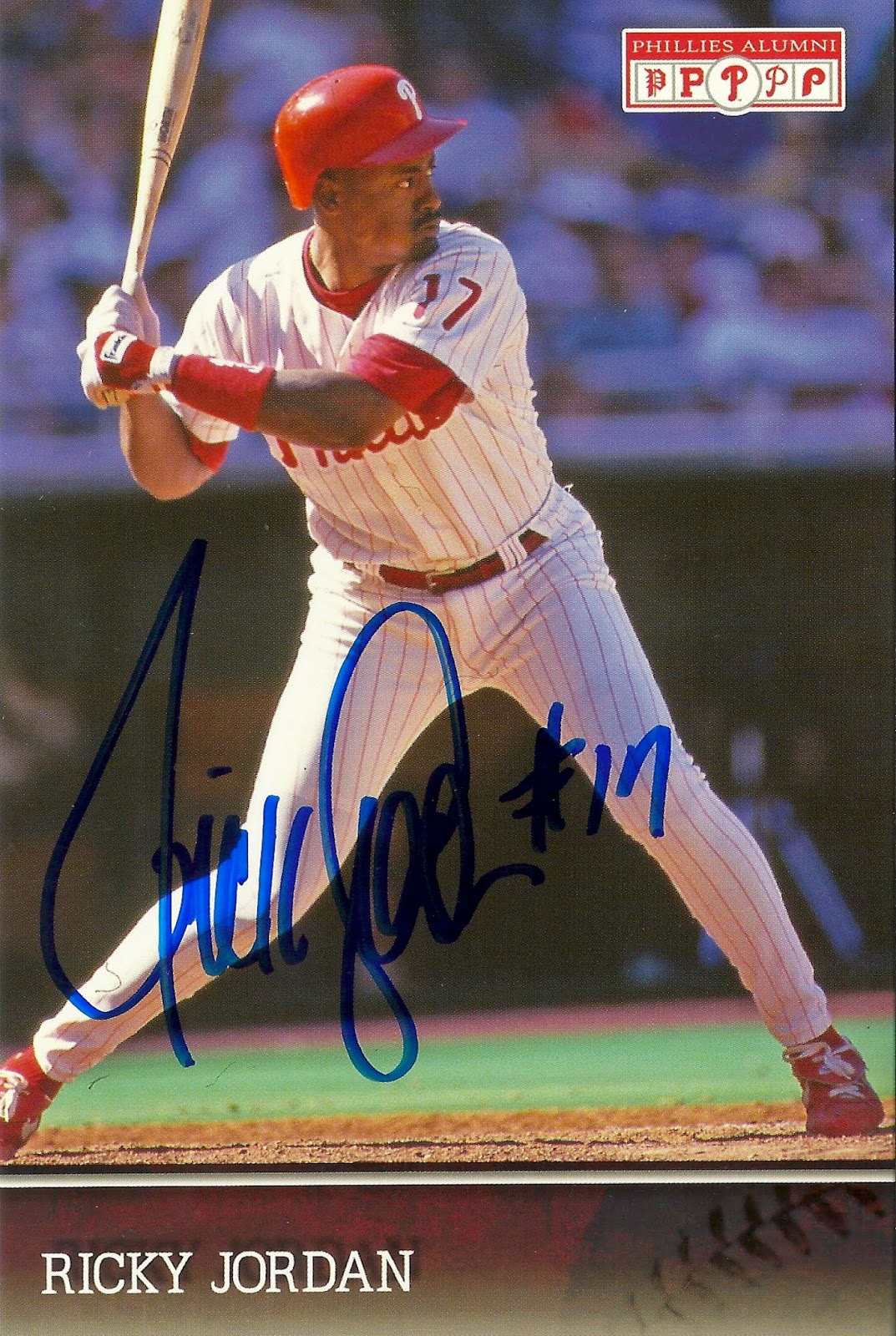 Featured Cards/Field Report:  Whether you're a lifelong or a casual Phillies fan, I highly recommend attending a Wall of Fame ceremony at the ballpark.  The Phillies do a lot of things wrong, as evidenced by this season, but one of the things they do right are ceremonies honoring their legends and anything having to do with their alumni.

My wife and my oldest son attended Friday night's game primarily for the Roy Halladay bobble head the Phillies were giving out.  My wife and I attended this game primarily to watch former manager Manuel get inducted into the Phillies Wall of Fame.  As a bonus, we got to meet and receive autographs from Rheal Cormier (again) and Ricky Jordan, who were signing in front of the Majestic Clubhouse store prior to the game.

The ceremony for Manuel was fantastic.  Most of the living Phillies Wall of Famers came back for the ceremony, with Mike Schmidt, Steve Carlton and Darren Daulton receiving the warmest ovations.  Manuel's rambling, wonderful speech can be found here and it was great to see both Jim Thome and Halladay participate in the ceremony.

Jenna took a lot of great pictures during the ceremony, and presented below are a few of my favorites.  The Wall of Famers in the top row photo on the right are (from left to right) - Manuel, Dallas Green, Jim Bunning, Carlton, Schmidt, Larry Bowa, Dick Allen, Greg Luzinski, Garry Maddox, Tony Taylor, Bob Boone, Juan Samuel, Daulton, John Kruk and Mike Lieberthal.

4-5 record -- lucky you. The Phils are 1-5 with me in attendance this season. It looks like a great night all in all! We were driving back from vacation so I couldn't have made it. I wish I had gone yesterday but we were recovering from vacation. Anyway, I am heading there next Wednesday for the BP Special, so hopefully the Phils can double my season win total.