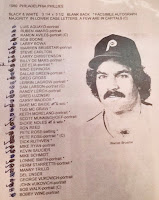 Description:  As was the case with all Phillies team-issued photo cards issued since 1970, these cards feature a black and white photo with the players' name below.  The backs of the cards are blank and there's no indication on the cards themselves they're from 1980.  Some of the cards contain blue facsimile autographs, as noted on the checklist below.  One way to tell if the photo card is from 1980 is the fact that these are the only photo cards from this era on which the majority of the players' names aren't all in capital letters.  I've listed below those few cards on which the player's name is in all capitals.  (Thanks to Phillies collector Rick and his scanned checklist shown here.)

How Distributed:  The cards were handed out to fans individually and supplied to the players in order to reply to fan mail or honor autograph requests.  I could be wrong, but I don't believe these cards were ever available in complete set form.
I'm theorizing that the cards with the players' names in capital letters were issued later in the season, as Ramon Aviles, Dan Larson and Bob Walk were not on the opening day roster and all made their 1980 debuts in late April or May.  Nino Espinosa and Warren Brusstar are the outliers here as those pitchers made their 1980 debuts in July and their names on their cards use upper and lower case letters.  Brusstar, who started the season on the disabled list and first pitched for the Phillies on July 13th, is the latest player to appear in a game in 1980 and appear on one of these photo cards.

Manager (1):  Green
Coaches (6):  Amaro, DeMars, Elia, Ryan, Starrette, Wine
Surprises:  Not to sound like too much of a weirdo, but the seven-year-old me would have loved to have added Scott Munninghoff's card to my collection.  He was one of those guys who was in the prospect section of the yearbook and no one in my little circle of young Phillies fans had any idea who he was.  Munninghoff made the team's opening day roster, appeared in four games, and was sent back to Oklahoma City in early May where he'd stay the rest of the season.

Omissions:  The entire opening day roster, every coach and manager Dallas Green all received cards.  Every player to have suited up for the Phillies in 1980 prior to September also received cards, with Espinosa and Brusstar, as noted above, being the latest additions.  The Phillies had 9 September additions to their roster who understandably did not receive photo cards:  Jay Loviglio, Marty Bystrom, Bob Dernier, Tim McCarver, Orlando Isales, Mark Davis, Sparky Lyle, Don McCormack and Ozzie Virgil.

Variations/Rarities:  Rose appeared on two different versions of photo cards in 1980, no doubt due to high autograph request demands.  Phillies collector Rick sent me a scan of his checklist for this set cluing me in to the fact that cards for Bake McBride and Dickie Noles can be found both with and without facsimile autographs.  A few years back, I also added Lerrin LaGrow and Keith Moreland cards to my collection without facsimile autographs.  Also, fellow collector Steve indicates there could be a Nino Espinosa variation card available and for the sake of completeness, I've added it here too.
Finally, while not part of the team-issued set, there is a 1980 black and white photo card of the Phillie Phanatic issued by Harrison/Erickson and this card is roughly the same size as the rest of the 1980 set.