Number of Cards:  38
Card Size:  3 1/4" x 5 1/2"
Description:  As was the case with all Phillies photo cards issued throughout the 1970s, these cards feature a black and white photo with the players' name below.  The backs of the photo cards are blank and there's no indication on the cards themselves that they're from 1979.  Some of the cards contain blue facsimile autographs, as noted on the checklist below.
How Distributed:  The photo cards were handed out to fans individually and supplied to the players in order to reply to fan mail or honor autograph requests.  I could be wrong, but I don't believe the cards were ever available in complete set form.  The set's checklist is comprised of the manager, four coaches, all but one of the 25-man opening day roster (Mike Anderson is omitted) and eight players who would make their season debut with the team between May and early July.

Manager (1):  Ozark
Coach (4):  Starrette, Taylor, Tiefenauer, Wine
Surprises:  The biggest surprise here is the inclusion of a Bud Harrelson card, although his photo could ver well be from 1978.  Harrelson had retired from baseball following the 1978 season, but injuries to Larry Bowa and Manny Trillo in the early part of the season forced the club to reach out to him.  Harrelson resigned with the Phillies on May 25th and made his season debut a day later.  The last player to make his debut during the season and appear within the set is Dickie Noles, who made his big league debut on July 5th.
Omissions:  For some reason, hitting/third base coach Billy DeMars didn't card a new card for this set.  He'd return to the checklist in 1980.  Also odd is the omission of outfielder Anderson who returned to the Phillies via free agency on March 5th and appeared in 79 games for the team.  Five other players, all September call-ups, appeared with the Phillies in 1979 and didn't receive photo cards - John Vukovich, John Poff, Jack Kucek, Keith Moreland and Dan Larson.
Variations/Rarities:  Fellow collector Steve let me know of a few rarities and variations for this set.
And while it's definitely not part of the team-issued photo card set, I'm including a scan of the Richie Ashburn photo below which could have fit in nicely with the set.  The photo is 5" x 7" and the note on the back indicates the Phillies broadcaster signed the photo on June 16, 1979 at Whitehall Mall.
Also See:  My First Phillies Game; 1979 Burger King Phillies #13 Pete Rose
Resources:  The Trading Card Database; Beckett.com; Phillies collector Steve F.

This set was originally featured in a post back in November 2014, and I'm going to slowly go through these team-issued set posts and update them with new information learned (if any) over the past six years. 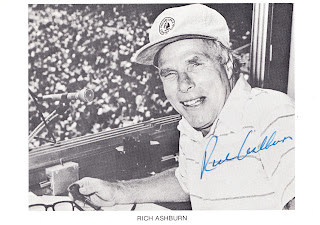