What It Means:  Our son Ben's Pooh Bear made his Phillies TV debut in this game, appearing in the stands with a group of other Phillies fans at one point during the broadcast.  The bear, affectionately named Mr. Liltly by Ben for reasons unknown, looks to have scored a pretty good seat.

What Happened:  Nola became the first Phillies pitcher since at least 1893 to allow three or fewer hits and strike out eight or more batter in three straight starts, which seems almost hard to believe.  (Source - Matt Breen Tweet.)  He had a comfortable 6-0 lead when he departed after seven innings largely because of Hoskins' big hit.  Jean Segura homered in the first and Bryce Harper drove home Hoskins in the fifth with a double of his own.  Ramon Rosso pitched the final two innings for the Phillies, giving up a two-run home run to Dominic Smith in the ninth.

Featured Card:  I'm thrilled to present a Hoskins card, as it's been way too long since his last featured card in a game summary post - Game 149 of last season, September 17th.

Transaction:  Nick Williams (of) the final remaining hold-over from the 2015 Cole Hamels trade with the Rangers, was claimed off waivers by the Reds.  Williams will report to the Reds' alternate training site in Mason, OH. 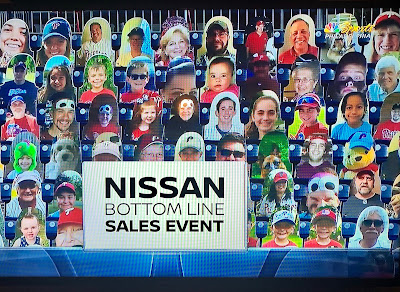 Email ThisBlogThis!Share to TwitterShare to FacebookShare to Pinterest
Labels: 1971, 2020, Hoskins

In this game I was done dirty by Aaron Nola who, like Roman Quinn, had captured my attention when I saw the Reading Fightin' Phils play a few years ago.

Nola and Wheeler as a solid 1-2 atop the Phillies rotation is something for Phillies fans to be excited about!