I'm trying to get the word out that I've started a new blog and here's a crossover post from it, chronicling each card we add to our new 1965 Topps set.  We started collecting the set this month and I'll be taking a deep dive look at each card we add.  Please click on over there for all of the posts to date, including a look at the Phillies Alumni featured so far.

Hall of Famer Robin Roberts was one of the most dominant right-handed pitchers of the 1950s, leading the National League in wins for four straight seasons between 1952 and 1955 and earning seven straight All-Star Game appearances.  A work horse for the Phillies, his 20-win season in 1950 led the Phillies to the World Series and made him the first pitcher to win at least 20 games for the club since Grover Cleveland Alexander did it in 1917.  Straddling the 1952 and 1953 seasons, he pitched 28 complete games in a row with his appearance on September 6, 1952 lasting 17 innings.  He led the league in strikeouts in 1953 and 1954, and was named The Sporting News pitcher of the year in both 1952 and 1955.

After departing the Phillies, Roberts bounced from the Yankees, Orioles, Astros and Cubs, pitching a total of 19 seasons and retiring at the age of 39.  He finished with a career record of 286-245 with a 3.41 ERA and exactly half of his 609 starts resulted in complete games (305).  His 609 games started currently rank 20th on the all-time list.  He was the first Phillies player to have his number retired in 1962 and the first player inducted into the Phillies Wall of Fame in 1978. 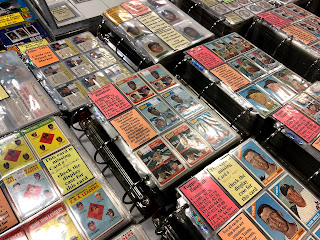 Building the Set
December 7, 2019 from King of Prussia, PA - Card #8
Doug and I attended the Philadelphia Sportscard & Memorabilia Show held inside the Valley Forge Casino.  After meeting Benito Santiago, Brad Lidge and Ryan Howard and having secured the first five cards for our 1965 Topps set, I continued scanning tables for the final two cards I needed to complete my 1971 Topps set.

I found a dealer with organized binders of vintage Topps cards, and I dug in.  Quickly finding the last two cards I needed from 1971 - #662 Mike Hedlund and #715 Horace Clarke,  both in great shape - I started browsing through binders from other years, in search of cards for my 1960s Phillies team sets.  I added five cards (all high numbers) for those sets and then decided to look through the 1965 Topps binder, figuring Doug wouldn't mind if I added a few more cards to our set.  I found four more sharp cards for our set, featuring players who all had some meaning for me personally.  This Roberts card was the first of those four cards along with Jim Fregosi (#210), Juan Pizarro (#125) and Harvey Haddix (#67).  For all 11 cards, the dealer gave me a price of $62, which I felt was fair given I had calculated a price of $75 in my head for the lot.  I snapped a quick picture of his table before moving along.

With the palm tree visible over Roberts' right shoulder, it would appear this photo was taken during spring training.

1965 Season
At the start of the 1965 season, Roberts was relegated to the Orioles bullpen as the team already had set its starting pitching rotation with Steve Barber (#113), Dave McNally (#249), Wally Bunker (#290) and Milt Pappas (#270).  With Pappas missing a few games in May, Roberts got his shot and pitched four straight complete games.  But he struggled after that, going 1-7 over his final eight starts with the club and the Orioles released him on July 31st.

The Astros picked him up a week later, and he immediately rewarded them with two shutouts in first two starts.  His first Astros start came against the Phillies, and he allowed just four hits while striking out six.  In total, Roberts started 25 games for both teams, going a combined 10-9 with a 2.78 ERA.

Phillies Career
Roberts signed with the Phillies as an amateur free agent before the 1948 season and he was sold to the Yankees on October 16, 1961.  In the decade-plus in between, he established himself as the best right-handed pitcher in franchise history.  He still ranks first in franchise history in games (529), complete games (272), and innings pitched (3,739 1/3), and is second only to Steve Carlton in games started (472), wins (234) and strikeouts (1,871).

Following his big league career, and after a partial season with the Reading Phillies in 1967 attempting a comeback, Roberts' later crossed paths with the Phillies when he served as a color commentary on Phillies broadcasts for games between 1974 and 1976.  Along with his induction into the Phillies Wall of Fame in 1978, he was also named to their Centennial Team in 1983.  His statute sits outside the first base gate of Citizens Bank Park, and when he passed away in 2010 the Phillies wore a black #36 patch on their uniforms and hung a Roberts jersey in their dugout during each game.