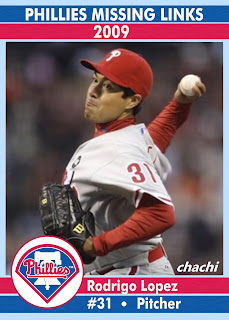 When rookie starting pitcher Antonio Bastardo landed on the disabled list on June 30, 2009 with a left shoulder injury, the Phillies needed to reach down to the minor leagues to fill Bastardo's rotation spot.  Both Carlos Carrasco and Kyle Kendrick were in the mix for the job, but the Phillies ended up selecting the contract of veteran Rodrigo Lopez from the IronPigs.  At the time, Lopez had appeared in parts of seven seasons with the Padres, Orioles and Rockies and he had won at least 14 games three different years.  He made five starts for the Phillies in July, with the team going 4-1 in those games and Lopez turning in a respectable month.

However, the Phillies acquired Cliff Lee from the Indians on July 29th and Lopez was moved to the bullpen for a few weeks to make room for the newly acquired ace.  He was optioned back to the IronPigs on August 10th when Chad Durbin was activated from the disabled list and he wouldn't return to the club again.

In total, Lopez compiled a lifetime record of 81-89 with a 4.82 ERA over 257 games.  He best season came in 2004 when he went 14-9 for the Orioles.  As a postscript, the Phillies signed Lopez to a minor league deal in January 2013 with an invitation to spring training.  He didn't make the team and was released in late March, ending his big league career.

Phillies Career
7 games (5 starts), 3-1, 5.70 ERA over 30 innings, 11 walks, 19 strikeouts
Acquired:  March 5, 2009 - Signed as a minor league free agent formerly with the Atlanta Braves organization.
Debut:  July 3, 2009 - Started and won against the Mets, pitching 6 1/3 innings and allowing two runs on six hits while striking out four.
Final Game:  August 9, 2009 - In his worst outing with the Phillies, allowed six runs on three hits and three walks against the Diamondbacks in 2/3 of an inning.  He entered the game in the seventh, relieving Tyler Walker.
Departed:  September 8, 2009 - Released and signed as a free agent by the Arizona Diamondbacks, December 16, 2009.