This a crossover post from my other blog, chronicling each card in the wonderful 1956 Topps set. Today's post features former the Phillies team card.  Please click on over there for all of the posts to date, including a look at all the Phillies Alumni featured in the set.


Topps included full team photos in its baseball card set for the first time in 1956, having previously experimented with team cards in a limited edition 1951 stand-alone set.

Building the Set
July 12, 1989 in Sea Isle City, NJ - Card #78
My grandparents' beach house was located on 37th Street in Sea Isle City, right behind the giant white concrete monstrosity of the Spinnaker condominiums.  On lazy summer afternoons, after a morning at the beach and equipped with my lawn mowing money, or money given to me from my parents or my Nana, I would either exchange dollar bills for quarters to play Rolling Thunder at the arcade on the Sea Isle Promenade, or I'd walk nine blocks to 46th Street where there was a baseball card store.  I never knew the name of that baseball card store, but on any given day throughout the summer there would be bikes piled up outside by the front door and there'd be two to three baseball card collectors hovering over completely unorganized boxes of cards on any given day.

The store was never empty.  Looking for the building now on Google Maps, what had been a nameless baseball card store in the late 1980s now appears to be a deli.

I built most of our 1973 Topps set at that store, as the proprietor had an 800-count box of cards from the 1970s in relatively decent shape and at extremely affordable prices.  I remember walking away with a stack of 30 to 40 commons from the 1973 set for no more than $5 or $6 a pop.  This Phillies team card from the 1956 Topps set was in the main display case of the store, and I'm fairly certain it was the oldest card for sale.  There would have the usual suspects of the day in that case - a few Ryne Sandberg rookie cards, maybe a Mark McGwire card from the 1985 Topps set and a few Dwight Gooden cards.  But this card always stood out, and I looked at it several times over several visits before finally asking the dealer to see the card. 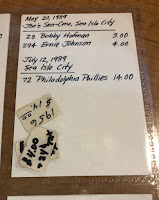 I paid $14 for it, which was probably too much at the time, and it was definitely the most I had ever paid for a single card with "my" money up to that point.  Consistent with my tracking of purchases at the time, I cut the price tag away from the protective sleeve for safe-keeping.  Is it any wonder I'd go on to choose accounting as my professional career?

The Card
I took a deep dive look at this card over at The Phillies Room back in 2011.  Here are the subjects featured on the card, including a listing of their 1956 Topps card if they had one.  The uncredited batboy sitting in front is long-time Phillies employee Kenny Bush.  Jack Meyer is listed as "Meyers" on the card's front.  The photo had to have been taken before June 15, 1955, as that's the day Earl Torgeson, featured all the way to the right in the back row, was sold to the Tigers.

Flipping over to the back of the card, Topps lists Shibe Park as the club's home field even though the ballpark's name had been changed to Connie Mack Stadium for the 1953 season.  Here the other categories that need to be updated:

1956 Season
With manager Mayo Smith at the helm, the Phillies finished in fifth place in the National League with 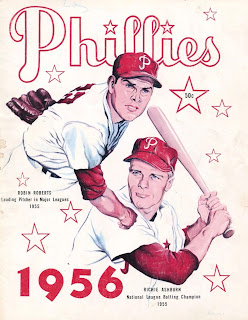 a record of 71-83, 22 games behind the pennant winning Brooklyn Dodgers.  The team hit their high water mark only four games into the season when they were 3-1.  They'd quickly drop to under .500 where they stayed the rest of the year.  Their top hitters were Ashburn, Lopata and Jones while Roberts, Harvey Haddix and Simmons were the top three starting pitchers in their rotation.  Lopata and Roberts represented the Phillies at the 1956 All-Star Game but neither appeared in the game.

Phillies Cards That Never Were
There are a few options here for 1956 Topps cards that never were:

Haddix, Stu Miller and Elmer Valo would be excellent candidates to receive Phillies cards had their been a 1956 Topps Update set.  Haddix and Miller appear in the 1956 Topps set with the Cardinals while Valo appears with the Kansas City A's.

This is a really enjoyable post, Jim. It's great you kept track of the specific dates and places where you bought each of the cards, and even better when it brings back the specific memory of buying them as in this case. And even better than that, when it involves family or the shore or some other fond childhood memory.

Two other comments. First, that is my favorite Phillies yearbook cover ever. Boy, do I wish I had gotten mine autographed by the two of them. I am fairly certain I bought it while both were alive, probably in the early 1990s. That's a yearbook that, I believe, used to cost a lot more before eBay. I see two have sold recently for $51 and between $60 and $70. There are multiple listed for sale. Pre-eBay, I feel like I had to hunt around to find one for under $75. It just really stands out visually, and I feel like yearbook prices at card shows would go us as they got older except that one really leaped and then the 1955 dropped back down. Maybe not, but that's my memory. It took awhile to get it in my collection.

Second, one of my high school friends shared an office with Maje McDonnell in 1991. As a recent college grad, my friend helped design the Phillies ticket sales software program and they put him in there with Maje. He really liked Maje and said he was one of the nicest people he ever worked with. Maje always had a smile on his face when you would see him around the stadium, always posing for photos, etc. I remember running into him and saying hi at the Vet and at CBP. He was a war hero in WWII as well--all 5'6" and 130 pounds of him! He saved two soldiers' lives on Omaha Beach a couple days after D-Day and was wounded in battle in Germany. His SABR biography is well worth reading:

Thanks Steve, and I appreciate you passing along the Maje McDonnell story.