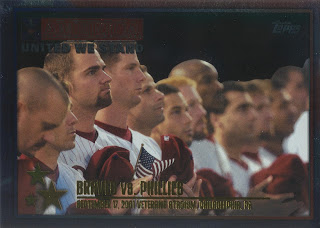 1.  Eddie Oropesa
2.  P.J. Forbes (not Nick Punto as originally believed - see update below)
3.  David Coggin
4.  Doug Nickle - I wasn't sure about this one, but according to Baseball Reference, Nickle's height is 6'4", the same height as Coggin who is standing next to him.
5.  Turk Wendell (not Jose Santiago as originally believed - see update below)
6.  Felipe Crespo - Crespo was acquired from the Giants in late July.
7.  Randy Wolf - I remember Wolf dyed his hair a garish blonde for some inexplicable reason during the summer of 2001.
8.  Brian L. Hunter
9.  Eric Valent
10.  Rheal Cormier
11.  Perhaps Jimmy Rollins?  This one is just too hard to tell.  (UPDATE - I'm going with Steve F. in thinking that this is actually Bobby Abreu.)

UPDATE (9/11/15) - Back in April, I received an e-mail from former Phillies pitcher Doug Nickle who confirmed it was indeed him in the photo standing next to David Coggin.  Doug was kind enough to point out that the players to either side of him are P.J. Forbes (and not Nick Punto) and Turk Wendell (not Jose Santiago).  According to the team's 2002 Media Guide, Forbes had his contract purchased from Scranton on September 17th, prior to the this game.  I've updated the listing above to reflect this information.

Thanks again Doug for the e-mail and I'm happy there's now an official record of the Phillies appearing on this important baseball card.
Posted by Jim at 9:00 AM