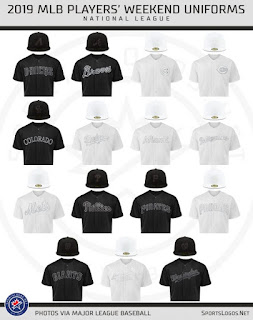 At the Ballpark:  This is the third annual Players' Weekend and all teams will inexplicably be wearing either all white or all black monochrome uniforms, as decided by the home team for each series.  The Marlins opted to wear all white, meaning the Phillies will be wearing all black.  Players' weekend was an idea that was cool the first year, somewhat unneeded the second year and now ridiculous the third year.

1971 Topps Missing Links:  Technically, this doesn't meet my definition of a true Missing Links card as Wayne Redmond never played a game for the Phillies.  Signed by the Tigers as an amateur free agent prior to the 1965 season, he made his big league debut on September 7, 1965 and would appear in four games.  He wouldn't make it back to the Majors with the Tigers until 1969, appearing in five more games.  In went 0 for 7 with a walk and three strikeouts in the only action he'd see in parts of two seasons, four years apart.

On October 23, 1970, the Tigers sent Redmond to the Phillies as "part of a conditional deal," per Baseball Reference.  He'd go to spring training with the Phillies in 1971, appearing in the team photo that appeared in their 1971 Yearbook, but then on April 5th the Phillies returned him to the Tigers.  Topps most have been optimistic about his chances, as they included him on a multi-player 1971 Rookie Stars card along with Keith Lampard and Bernie Williams in their high series.  So while Redmond was never officially a Phillie, I still thought he deserved a standalone Phillies baseball card to mark his 5 1/2 months with the club.
Posted by Jim at 5:10 PM

This whole "players weekend" schtick is just plain dumb. The monochrome uniforms (with matching trim) is just ridiculous, and maybe the Phillies should concern themselves more with not blowing 7-0 leads on their way to giving up 19 runs, rather than these silly gimmicks.

Let's see, Phillies'management already hired Charlie Manuel out of mothballs. What else can they do to distract fans from this 4th-rate bunch masquerading as professional baseball players?


(On the plus side, it's nice to see Wayne Redmond finally get his own card.)