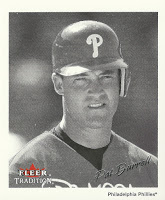 One Sentence Summary:  At one point holding a 7-0 lead, the pitching absolutely imploded as the Marlins came back to destroy the Phillies, 19-11.

What It Means:  We were away this weekend for a travel baseball tournament, which meant that mercifully we saw very little of this series.  Between the ridiculous monochrome black and white Player's Weekend uniforms and the inability of the Phillies to put away the lowly Marlins, it was a good weekend to largely miss anything Phillies-related.

What Happened:  There have been a lot of "worst losses of the season" for the Phillies this year, and you can add this one to the mix.  Vince Velasquez was provided with a 7-0 lead and he allowed the Marlins to quickly tie up the game by allowing seven runs in the third inning.  Nick Pivetta (five runs), Ranger Suarez (three runs) and Jared Hughes (five runs) didn't fare much better.  A costly error from Maikel Franco lead to four unearned runs.

Following this loss, Matt Gelb Tweeted this painful reminder:  The Marlins are 8-6 against the Phillies and 11-36 against the rest of the N.L. East.

Featured Card:  The last time the Phillies blew a seven-run lead and lost was August 26, 2003, against the Expos in Montreal.  Given that Pat Burrell appeared in that game, and the black and white uniforms worn by both teams in this game, I thought this was an appropriate card.

Transactions:  Bryce Harper was placed on the paternity list (Congratulations to the Harper's!) and Franco temporarily returned from his Lehigh Valley exile.
Posted by Jim at 7:00 PM

Email ThisBlogThis!Share to TwitterShare to FacebookShare to Pinterest
Labels: 2003, Burrell