Meeting Franco, Hammer and Dan Baker at the Deptford Mall


The Phillies Room support staff had a very busy Saturday, first heading to the Deptford Mall to meet a few Phillies and later making the trek to Lakewood for our annual Lakewood BlueClaws outing.  I'll have a full write-up of the BlueClaws game, the resulting autographs and an obligatory (now annual) BlueClaws Signing Autographs insert set, but first I wanted to share a post on our Deptford Mall outing.

Originally advertised as a Maikel Franco/Odubel Herrera joint appearance, Phillies reliever JD Hammer stepped in to take the place of the suspended Herrera.  It was a relatively light crowd for the event, but both Hammer and Franco were friendly and both graciously posed for pictures.  Hammer noted that he really liked his recently released Reading Fightin Phils card (modelled after the 1990 Topps set) and he also signed a few copies of the Chachi Photo Card I created given that the Phillies haven't gotten around to making a photo card for him yet.

The highlight for the boys though was meeting Phillies public address announcer Dan Baker who was there emceeing the event.  Baker posed with the boys and let them each try on his 2008 World Series ring.  Very cool indeed. 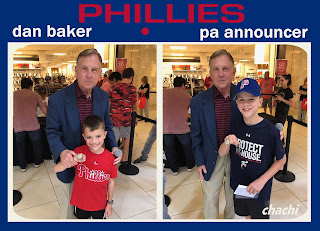 Nice pictures. I saw online that Odubel was supposed to be there instead of JD Hammer. Probably best for all involved that they made the change....