One Sentence Summary:  The flat Phillies fell easily to the Nationals, 4-0, in the second half opener.

What It Means:  Jon Morosi's Tweet is depressing:  On May 29th, the Phillies led the N.L. East by 3 1/2 games.  Since then, they're 14-22 with only the Mets having a worse record in the N.L.  This is the furthest out of first place they've been all season.

What Happened:  Nick Pivetta labored through five innings, allowing three runs on six hits.  The offense had eight hits, seven of them singles, going 0 for 6 with runners in scoring position. 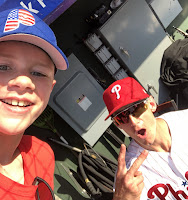 Featured Card:  Catcher Rob Brantly made his Phillies debut, striking out as a pinch-hitter against Sean Doolittle to end the game.  He was kind enough to sign Doug's card before the game.  Doug reported he made sure to honor each and every pre-game autograph request before returning back to the dugout.

Field Report:  Jenna and Doug attended this game, and Doug's pregame autograph hunt garnered signatures from Brantly (along with a selfie) and injured star Andrew McCutchen.  The signed Cutch ball was the highlight of Doug's night and he rode that joy through the duration of a rather boring game.

Transactions:  J.T. Realmuto was placed on the paternity list for a game, and he's expected to rejoin the Phillies on Saturday.  Brantly had his contract selected from the IronPigs and reliever Pat Neshek was moved to the 60-day injured list.
Posted by Jim at 9:00 AM

Email ThisBlogThis!Share to TwitterShare to FacebookShare to Pinterest
Labels: 2019, Brantly