One Sentence Summary:  A five-run ninth inning broke a 2-2 tie and sent the Phillies onto a 7-2 win over the Mets.

What It Means:  After getting beat around by the Braves two games in a row, it was nice to see the Phillies rebound with a big inning and a big win.

What Happened:  The Phillies once again victimized Mets closer Edwin Diaz when J.T. Realmuto led off the ninth with a double and was singled home by Jay Bruce.  The Phillies piled on with an RBI single from Sean Rodriguez, a two-run double from Jean Segura and then a double from Bryce Harper to bring Segura home.

Featured Card:  I'll give the card to Realmuto, the team's sole All-Star, who started the ninth inning rally with his lead-off double.  This is his Topps Living Set card, limited to 2,796 copies and created in the style of the iconic 1953 Topps set.

Transactions:  Austin Davis was sent back down to Lehigh Valley and Yacksel Rios took his spot in the bullpen.  It was also announced that Odubel Herrera has been suspended for 85 games for violating MLB's Joint Domestic Violence, Sexual Assault and Child Abuse Policy.  It's unclear at this time if he'll ever play for the Phillies again.

Field Report:  We spent all day Friday on Mickey's very own private island, Castaway Cay.  It was a great way to end a great vacation, and I was able to reconnect to the outside world briefly on Friday night to follow along as the Phillies came back to win against the Mets.  Our voyage came to a close on Saturday morning, as we started the long trip back to reality. 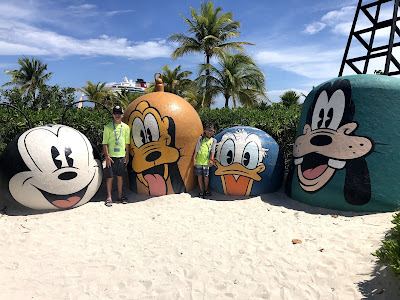 Email ThisBlogThis!Share to TwitterShare to FacebookShare to Pinterest
Labels: 1953, 2019, Realmuto