What It Means:  This loss and a Nationals win dropped the Phillies into third place for the first time all season.

What Happened:  Eflin lasted just three innings, allowing seven runs (six earned) on seven hits.  The big blow came in the third when Ozzie Albies hit a three-run home run to break a 4-4 tie.  The Phillies were mostly held in check after scoring four runs in the first on singles from Bryce Harper, J.T. Realmuto and Cesar Hernandez.  Sean Rodriguez added a pinch-hit home run in the sixth followed a few batters later by an RBI double from Rhys Hoskins. 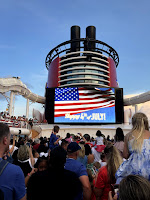 Featured Card:  While sailing aboard the Disney Fantasy, we visited Mexico for the first time as the ship ported in both Cozumel and Costa Maya.  Since the Phillies aren't giving me much to work with in terms of featured cards, here's a card of probably the most famous baseball player born in Mexico, Fernando Valenzuela.  Valenzuela appeared in 8 games for the Phillies back in 1994.

Field Report:  We celebrated the 4th at sea, complete with a fireworks display over the Disney Fantasy.

Transactions:  Juan Nicasio joined the long list of injured relievers this season, landing on the IL with a strained left groin.  Austin Davis was (briefly) recalled to take his place.
Posted by Jim at 11:00 AM

Email ThisBlogThis!Share to TwitterShare to FacebookShare to Pinterest
Labels: 1994, Valenzuela