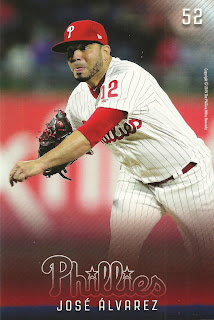 One Sentence Summary:  With the score tied in the ninth, Will Smith hit his first career home run off Hector Neris to send the Dodgers to a 4-3 victory.

What It Means:  The Phillies have lost three in a row, and they'll try to avoid a season-worst four in a row losin streak in the series finale Sunday afternoon.

What Happened:  Bryce Harper dramatically tied the score at 3-3 with an eighth inning home run off Julio Urias.  Prior to that, the Phillies had managed only a run and six hits against Dodgers starter Clayton Kershaw.

Featured Card:  The Phillies, for the first time I'm aware of, employed the strategy of an "opener" electing to have reliever Jose Alvarez pitch the first two innings of this game.  The lefty Alvarez then yielded to righty relievers Juan Nicasio and Cole Irvin in the third.  The strategy paid off as Alvarez held the Dodgers scoreless in his two innings of work.  It was Alvarez's first career start in his seven-year career, which had included 306 relief appearances prior to Saturday night.
Posted by Jim at 5:00 PM