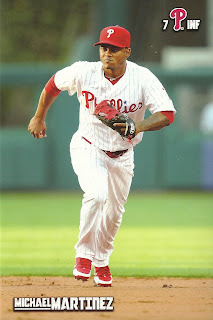 One Sentence Summary:  Jake Arrieta allowed a trio of home runs in this 6-3 series opening loss to the Dodgers.

What Happened:  Arrieta tied the game at 2-2 in the fifth with a single to left, after Andrew McCutchen (10) homered again in the fourth.  Max Muncy, Joc Pederson and Corey Seager all homered off Arrieta and Kike Hernandez added an eighth inning home run off Juan Nicasio to put the game away.

Featured Card:  Scott Kingery collected a pair of hits and started at third base.  He moved to center field in the seventh when Nicasio entered the game.  Matt Gelb Tweeted that Kingery became the second player since 1964 to play both third base and center field in a game for the Phillies since Michael Martinez did it back in 2013 in a 10-0 loss to the Tigers.

Transactions:  Zach Eflin joined a crowded Injured List with mid-back tightness and Cole Irvin was recalled from Lehigh Valley to take his place.  The Phillies currently have eight players on the Injured List, all pitchers except for Roman Quinn.
Posted by Jim at 7:00 PM