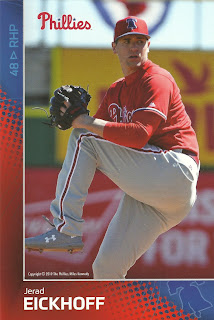 One Sentence Summary:  The Phillies offense managed two hits prior to the ninth inning in this 4-1 loss to the Rockies.

What It Means:  The Phillies lost three out of four to the last place Rockies, and they'll head to New York to open a three-game series with the Mets on Monday night.

What Happened:  With Jean Segura, Odubel Herrera and Scott Kingery on the disabled list and J.T. Realmuto getting a planned day off, a line-up consisting of Roman Quinn, Phil Gosselin and Andrew Knapp couldn't get anything going.  Cesar Hernandez had a particularly bad day, making a baserunning blunder in the fourth and running the Phillies out of a potential rally, striking out with runners on first and second to end the seventh, and grounding out to end the game as the potential tying run.

Featured Card:  Jerad Eickhoff made his first start of the year, pitching well until the wheels came off in the sixth inning.  He allowed four runs on seven hits while striking out eight.  Three of his four runs allowed came in the sixth.
Posted by Jim at 7:00 AM

Email ThisBlogThis!Share to TwitterShare to FacebookShare to Pinterest
Labels: 2019, Eickhoff