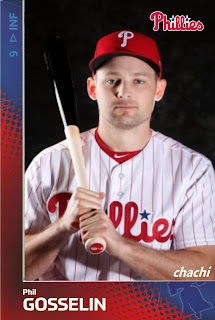 One Sentence Summary:  The Phillies temporarily rebounded from their horrendous Friday night loss to down the Rockies, 8-5.

What It Means:  The Phillies would need a win on Sunday to split the four-game series with the Rockies.  (Spoiler alert: It didn't happen.)

What Happened:  The big hits in this game were a three-run double from Phil Gosselin in the fourth and a three-run home run (5) from Bryce Harper in the seventh.  Andrew McCutchen provided some insurance with a solo home run (4) in the ninth.  Aaron Nola pitched somewhat better than his previous starts, working out of trouble during most of his 5 2/3 innings of work.  He allowed three runs on nine hits while striking out nine.

Featured Card:  Harper's homer was big, but it was Gosselin's double that gave the Phillies a 4-3 lead.  I've already featured the above card in an earlier post, but since I have no Gosselin cards to feature here, I'll go with this one again.  I've since had to add two more cards to the Chachi Photo Cards insert set (see below).

Transactions:  Three players landed on the disabled list on Saturday - reliever Victor Arano (elbow), infielder Scott Kingery (hamstring) and shortstop Jean Segura (hamstring).  The loss of both Kingery and Segura to hamstring injuries means that Gosselin will be the team's starting shortstop for at least the next 10 days.  Drew Anderson (rhp), Austin Davis (lhp) and Mitch Walding (3b) were all recalled from Lehigh Valley.

Chachi Photo Cards - nice addition! Are they box-loaders or even just one per case? Or maybe a regional set, only available in select stores in South Jersey?

Yes! These are a regional only rarity, available only at South Jersey Wawas.