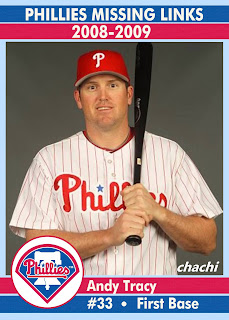 When the Phillies invited Andy Tracy to spring training in 2008 as a non-roster invitee, he had 12 professional seasons under his belt including stints with the Expos (2000-2001) and Rockies (2004).  He spent most of the 2008 season with the IronPigs before getting the call from the Phillies on August 23rd when Geoff Jenkins landed on the disabled list.  A week later he was back with the IronPigs when manager Charlie Manuel decided to use his roster spot for an extra bullpen arm.  When rosters expanded on September 1st, he returned to the Phillies again and in his 4 appearances that season he was used exclusively as a pinch-hitter, going 0 for 2 with a walk and a sacrifice fly.

His story followed the same script in 2009 - non-roster invitee to spring training, full season with the IronPigs, September call-up.  His sole start came on the final day of the 2009 season when he entered the playing field for the first time as the Phillies starting first baseman.  In the other 11 games in which he appeared during 2009 he was again used as a pinch-hitter, going 4 for 8 with an RBI.  Tracy returned to the IronPigs for the entire 2010 season, but he wouldn't get the call that September.  In his 3 full seasons with the IronPigs, Tracy hit .272 with 69 home runs and 261 RBIs, averaging 23 home runs and 87 RBIs per season.  His home run and RBI career totals are the franchise records for the IronPigs.

Tracy has been with the Phillies organization since 2012 serving in some capacity as a minor league manager, coach or roving instructor.  He's the team's minor league hitting/assistant field coordinator this season.

Phillies Career
13 games, 5 for 14 (.357), triple, 1 RBI
Acquired:  November 20, 2007 - Signed as a minor league free agent formerly with the New York Mets organization.
Debut:  August 24, 2008 - In a game against the Dodgers that the Phillies would eventually win on a Pedro Feliz walk-off home run in the 11th, Tracy pinch-hit for Carlos Ruiz in the 9th, drawing a walk.  Kyle Kendrick then pinch-ran for Tracy.
Final Game:  October 4, 2009 - Started at first base, going 1 for 4 with a triple off the Marlins' Josh Johnson.
Departed:  November 6, 2010 - Granted free agency and signed as a minor league free agent by the Arizona Diamondbacks, December 15, 2010.