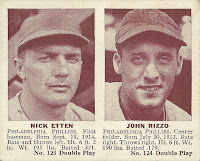 One Sentence Summary:  Jake Arrieta struggled again and Michael Conforto drove in six runs for the Mets in this 9-4 loss.

What It Means:  The Braves lost too and the Phillies remained 6 1/2 back in the division.

What Happened:  Arrieta lasted five innings, giving up four runs on nine hits.  Conforto hit a three-run home run off Hector Neris in the 9th, putting the game out of reach.  J.P. Crawford contributed a bases clearing triple in the 5th.

Featured Card:  As Matt Breen Tweeted, the Phillies are on pace for their worst finish to a season since the 1942 Phillies went 6-21 in September.  That 1942 Phillies team was missing several players due their service in World War II and they finished with a record of 42-109.  Nick Etten was one of the few bright spots on that team as the first baseman hit .264 with 8 home runs and 41 RBIs.  Etten's partner on this 1941 card, Johnny Rizzo, had moved on to the Brooklyn Dodgers for the 1942 season.